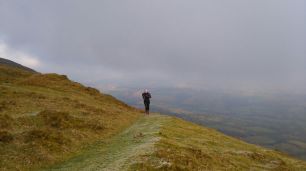 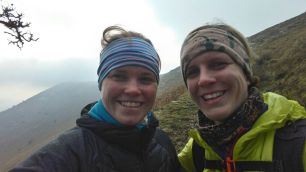 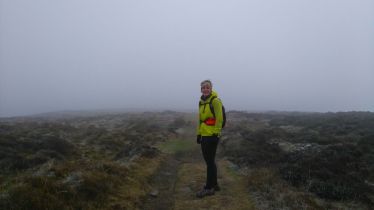 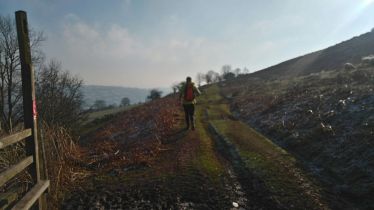 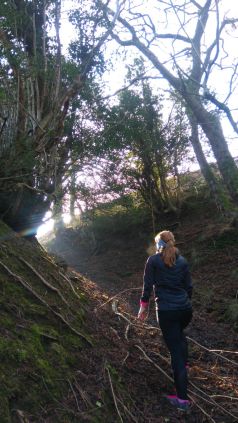 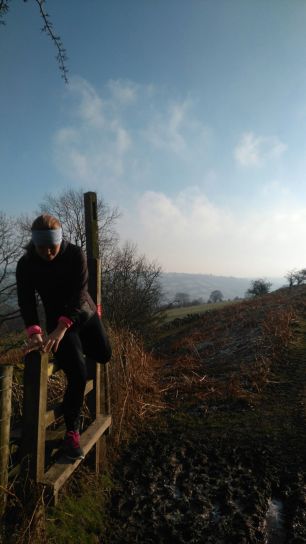 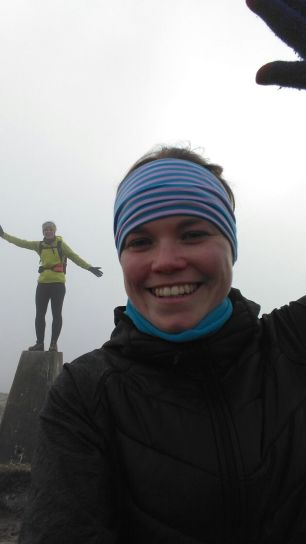 We ran 11.5km and only passed one other person. It was at the end of the run: a dog walker throwing a ball in a field for an energetic spaniel. For the rest of the time it was just the two of us: Alex and me.

We were staying for a few days on the Wales / England border, in the village of Longtown. We both needed a break, and found it in the cosy cottage with its log fire. But it was getting outside that really revived us.

One morning we both woke around 8am and slowly got ready and into our running things and headed out into the morning.

The garden looked beautiful – red berries covered in a dusting of white, the grass like stalagmites and a wren hopping into the bushes. It was frosty and sunny again, but the halo of mist had descended again onto the hilltops. We set out through a field behind the cottage. Alex spread her arms out wide and ran like you run when you’re a child – fast and free.

We wound our way up to the village and then headed out across the fields that would eventually take us to the top of the huge ridgeway that marks the old border between England and Wales. It soared above us, wearing a mottled coat of rust brown, sand, and green. The white blobs of sheep were scattered all the way along the hilltop.

The running was hard: the ground beneath our feet was frosty but not always completely hard and frozen, making it slippy and springy like running on wet sand. With every step I took my feet slipped slightly. It felt like I was running backwards at times, and as it got gradually steeper, in places I found it more efficient to walk. We could see the path we were heading for, winding its way up the hillside and we ran slowly towards it.

On our way we passed a cluster of abandoned shepherd’s huts. One was tumbled down completely but two still had their roofs and splintered wooden doors. I imagined shepherds huddling up here, looking down the valley at the village and the fields beyond. The grass here was wild and grew in tough mounds, and a bare tree stood in the clearing between the huts. Behind them was a path that followed a small stream up the hill, steep banks of trees on either side. It was dark and damp here but the sun rested at the top of the channel, showing us where we needed to go. We trudged and slushed our way through the thick carpet of brown leaves and the stream that trickled beneath. When we reached the top we came to the start of our ascent up to the top of the ridge. 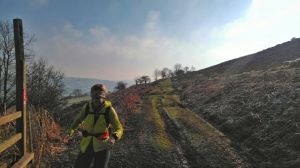 A flock of sheep gathered around a hay feeder stopped to look at us as we passed them and joined the path. I wondered how often they saw people here. But then they turned back to their hay, and we turned to face the hill. I want to call it a mountain, because that’s what it seemed like as we stood at its foot. It looked like a mountain, and climbing it felt like one (even if I have only ever climbed one mountain).

At times it made me nervous when I stopped focusing on putting each foot in front of the other and took a moment to look out across the valley. The view was beautiful, but the drop down the hillside was stomach-churningly steep, and getting worse the higher we climbed.

I tried to ignore the drop down the hill face and focused on the climb instead. And it was beautiful. Even the path was beautiful – bright green and mossy with sections of natural slate walls and nooks every now and then. Puddles were frozen over, bubbles of air trapped beneath and creating beautiful abstract patterns. 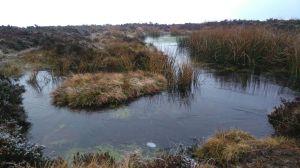 And then suddenly, miraculously, we were at the top.

We climbed the last section of pathway and emerged on the top to see… Nothing. The ridgeway was covered in cloud, completely obscuring what I imagine would have been stunning views on either side – views out of the countryside miles in each direction. At first I was disappointed, but then I looked closer. Actually, the ‘nothing’ was beautiful too. The clouds rolled across the ridgeway in gusts and waves, obscuring patches of long grass and frozen pools, then revealing them again. The gentle moving of the cloud was hypnotic and magical. It made us feel completely alone in the world, like we were up in the sky and everyone else was far away on the ground. And we were alone. 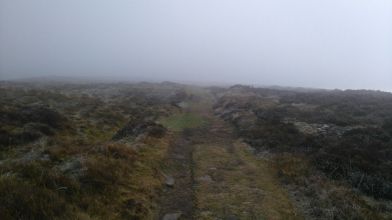 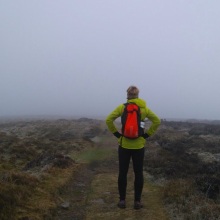 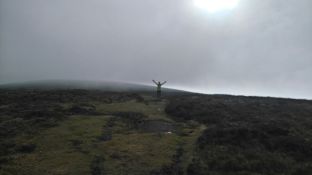 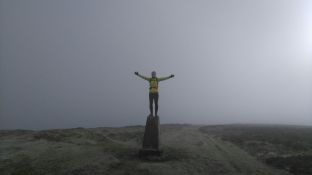 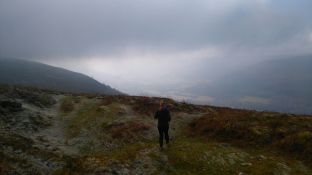 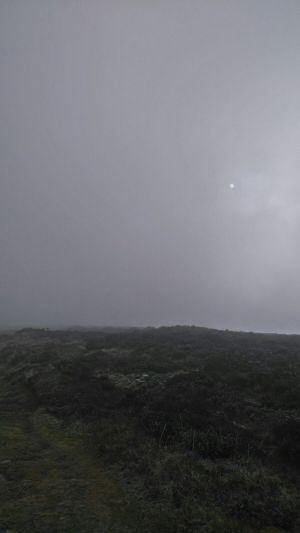 It was bitingly cold at the top, so we started running again, following the old ridgeway path. This was wonderful running – not as hard as pavements but hard and smooth enough to spring from and run with ease. After covering only about 2km in an hour (because of the steep and tough-going terrain) we sped along and had suddenly covered another 4km without even thinking. Running here felt wonderful, like my body was doing exactly what it was meant to do. It was so cold that it was the only way to warm up, so felt completely natural. It felt better to run than to stop and face the icy wind.

Again, Alex spread her arms and ran like a child, making gleeful noises.

Her happiness was infectious, and besides, I was feeling incredibly happy too.

Eventually it was time to come down from the hilltop (or the mountain, as I will always think of it as. It really did feel like we were at the top of a mountain). As we got lower it got warmer and I recovered feeling in my nose and fingertips. We sped down, so much so that at one point I slipped and fell – covering my whole bottom half and one of my arms in mud. I just laughed – it was bound to happen eventually. My running shoes have no grip (I need to invest in some trail running shoes) and in places the path was just a trench of mud.

I was muddy but happy as we made our way back to the cottage I so quickly thought of as home. My legs were exhausted by now but I knew we didn’t have far to go.

And we were. Suddenly we were there, jogging down the lane to the little cottage where I knew the heating and the fire would be on, and a hot shower would be only seconds away. We gave each other a high five – and I think we deserved it.